If you are new to DNA and genealogy---Don't worry if you don't "get-it" yet, I just wanted to let people know Gedmatch has added another tool to their arsenal.

Late last night while surfing my numerous Facebook genealogy groups, I happened across a post about a new tool. How had I missed it? I had been working on Gedmatch all day!

I went to Gedmatch and immediately found what everyone was discussing but couldn't figure out.


When I opened the tool this is what I read:

"For several years, GEDmatch has provided genetic genealogists, both beginners and experts, the ability to search for matches among kits in their database without regard to vendor. Also, GEDmatch has provided a rich suite of analysis programs allowing users to dig deeply into the genetic details of their matches, enhance the reports from their vendors, and even pursue their own original research ideas. Our algorithms are evolving to extract the most trustworthy and meaningful matching information possible using the markers common to pairs of kits even though sometimes limited.

Unfortunately, all too often, kits appear to share a DNA segment purely by chance. To combat this confusing phenomenon, we recently have developed a reliability measure that allows users to assess the quality of a matching segment in an intuitively appealing fashion. We also use the measure to guide our matching algorithms as they wring the greatest amount of useful information possible from the markers common to pairs of kits.

If we could assume that marker characteristics were uniform in all regions within chromosomes, we could use a "one size fits all" requirement for matching segments as is sometimes done. Unfortunately, the relevant characteristics vary widely. Some long segments with few markers may be accidental matches. Some marker rich short segments are often discarded although they are profoundly non-random.

Using the characteristics of each and every marker in a segment, we compute the expected number of purely chance matches to it to be found in the database. That number is then used to classify the segment into one of several levels reflecting the likelihood that the random matches may overwhelm the real ones. When a user executes a one-to-many search or a one-to-one comparison specifying a minimum segment length, the display can then include an estimate of validity for each segment found.

One can assume those segments designated to be valid are the result of a DNA inheritance process rather than mere chance. Questions may still remain about how far back shared DNA originates, but a confounding factor has been removed."

An earlier version of this tool was once part of the One-to-One comparison on the free side of the Gedmatch site. It was often overlooked, because people didn't understand it's value. And, it is a valuable tool.

Now, with more people doing triangulated groups, and the growing understanding of identical by descent (IBD-you share a common ancestor) and identical by state or chance (IBS or IBC-false positives) more genealogists are looking closely at the chromosomes of their matches to determine if they are indeed IBD matches.


1. You need to be a Tier 1 Member ($10) donation for a month of access to Tier 1 tools. Tier 1 provides a wonderful assortment of automated genealogy tools that can save a researcher hours of tedious work.

2. You have to upload your raw data to Genesis because it is on a separate server. You will get an additional Gedmatch kit number specific for Genesis. 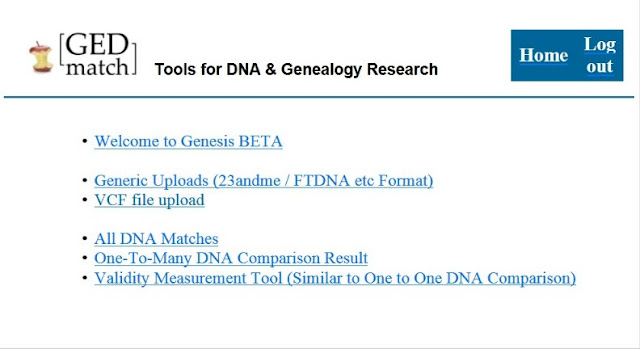 Select All DNA Matches - you see a match list for everyone who matches you who has uploaded to Genesis, their kit number, user name and contact information. (Like the L button on your regular Gedmatch One-to-Many Page)

You can use Ctl-F, enter your kit number, and find the different people with whom you share DNA. By studying their list of matches you might recognize someone with whom you have already made a connection.

One-to-Many--gives you a list of all the people you match and the information as shown in this header.

As on your regular Gedmatch One-to-Many page, click on the "A" between your matches kit number and their name, and you get a 1:1 comparison of chromosomes 1-22 complete with color graphics. The heading on the page explains how to "read" what you see.

As you scroll though the chromosomes of the person whose DNA you are comparing, you want to see solid green over blue to validate base pairs with a true match.

If you use the Validity Tool and enter your kit against your kit, you will get solid green over solid blue. You match yourself perfectly.

If you compare yourself against a parent, sibling, grandparent or first to second cousins you will find significant segments of solid green over blue in many places.

Areas of yellow over blue denotes a half match; a possible match to either your maternal or paternal line.

You will only know which side they are on by comparing genealogy. (Unless you have done something called Phasing--a whole other post. In this case you will get lavender.)

I appreciate the visuals. They help me see exactly where and how I match with others.