I realized that in my following my passion, life seems to click. Everything flowing--- the way life should always be. I also realized I needed some balance. Life has a way of alerting you when you don't get enough balance. Eighteen hour days sitting a the computer, writing emails, answering emails, writing a book, answering phone calls from friends and family asking, "How do I...?" (that's one of the things I love the most), trying new combinations of online genealogy tools; it was taking a toll on my health. I needed some exercise.

My sister, Gretchen arrived in town with my two great-nephew's (ages four and five). A weekend planned full of family fun. We went to Kiddie Park that evening; a local favorite for parents and children. The park has water boat rides, a kiddie roller-coaster, bumper cars, a train ride, caged Ferris Wheel, spinner ride, airplanes, pop-corn, cotton candy and much, much more.

I even introduced Santa to my great-nephews. They promised they wouldn't tell anyone he spends his summers incognito at Kiddie Park, using his pretend name, Ron Adams.

We had a blast at the park. (I could barely keep up.)

The next morning, my son and I took the boys to Windle's Rock Shop. Tom Windle is not only an expert on minerals and rocks, he is also a wonderful historian and genealogist. Tom told us about the major turning point of the Revolutionary War--- The Battle of King's Mountain and his Patriot ancestor, John Sevier.  For information about this historic battle click HERE. You might find some of your own Patriot relatives who fought in this battle click HERE. (If you have one who is not on this list; join WikiTree and add them.)

A member of Tom's staff told us where we might find some good fossils. No luck with the fossils, but we found some locust exoskeletons and a golf ball. We enjoyed whispering in the band-shell and hearing our voices echo from one end to the other.

I was so stiff and sore I could barely move.

The next morning my son took the boys on a trip to Woolaroc Museum. The trip was almost a bust. An electrical storm had knocked out the power. Once again, Uncle Vern to the rescue. He sweet talked a museum groundsman to allow them a climb up the tower. 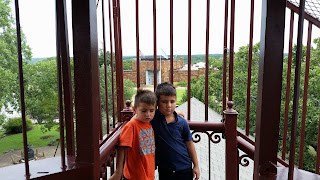 Once back in town, their NeNe took them to a local pool with corkscrew slides.

I was home; again playing on the computer (not spending time with my sister and nephews during their short visit), and a phone call came. (Remember: Life has a way to alert you when your are out of balance.)

My sister slipped and fell at the pool. An ambulance was taking her to the hospital. I was needed for my great-nephews.

Funny how when in a crisis with your mind focused on others, all of your aches and pains disappear.

I rushed to the pool. Medics were ready to load my sister (neck immobilize and strapped on a gurney) in the ambulance.  My nephews calmed; we hurried home. My son had arrived, and after a few calls to family, I was off to the hospital.

Cousin (they call him Uncle) Vern to the rescue again! He took the boys on another rock hunt. Success! The boys found some fossils near a creek.

My sister had a pretty severe concussion and they released her with orders to stay in bed for at least a day...and not to hit her head on concrete for another thirty days, or she might have some problems. (They actually said that.) Oh, the wonders of modern medicine!

After my sis and nephews departed, my son and I went fossil hunting. Success big time. I'm glad I took my reusable grocery bags; the fanny pack was way too small.

Big storm that night. Up again the next morning, perfect hunting conditions. Finding the fossils was like collecting pieces of ice after a hail storm.

Oh, my aching back! My bend-over gave out. The area was too wet and muddy to sit on the ground. 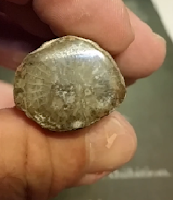 After three days of rock hunting, even my eyelashes hurt. I was like the rusted Tin Man all over.

The next morning, I felt great.

Spent some time with one of my bestest friends, Mary T. Kincaid, (she writes books for children).

While  teaching her some online genealogy tool tricks we discovered WE MIGHT BE COUSINS through MY BRADY LINE!