For DNA Painter Enthusiasts: A Personal Interview with Jonny Perl

I know many of you have fallen in love with the online tools at DNA Painter. It has taken the genealogy community by storm. I know several people have said on different forums they have become addicted to the Painter tool. 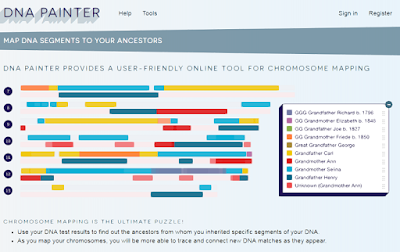 The site has several other tools I have become addicted to. Jonny made the cM Relationship Chart developed by Blaine T. Bettinger, The Genetic Genealogist, interactive. And with the addition of The DNA Geek, Dr. Leah Larkin’s probability calculations you can’t get much better at narrowing down how you relate to your matches. 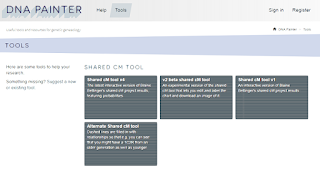 These tools are a must for people who want to knock down brick walls in their tree and for those who are adopted and are using DNA to find their biological families. 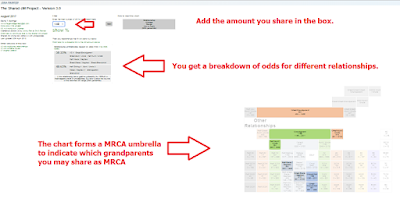 (Big hint here: keep an eye on the DNA Painter site. Jonny has more new tools in the works that are going to blow everyone away.)

I wanted to know Jonny better (he's from the UK) I also wanted to know how popular genealogy testing is in the UK. I thought you might want to know too. Jonny graciously accepted my request for this interview.

How popular is pursuing genealogy in the UK? Does interest in it seem to be growing?

There’s a long-standing interest, with TV shows like ‘Who Do You Think You Are?’ helping to boost it in recent years.  I’m not sure if it’s growing or not – I’m in so deep that it’s hard to get a perspective! I know two new family history conferences were announced today, so I guess that says something!

What about attitudes about DNA testing? Would you say the number of people testing in the UK is increasing?

It’s reasonably widely known but I wouldn’t say it’s mainstream yet. While the market is far less evolved than in the US, there are lots of TV ads, and I’m sure many kits are being sold.

Are their many UK based testing companies?
No; the big international players – Ancestry, MyHeritage, FamilyTreeDNA, and 23andme – still dominate, but Living DNA is UK-based and have also made great advances in a short time with their more targeted ethnicity estimates.

When did you first get interested in genealogy?
Comparatively recently!  I was always fascinated by history in general, but my interest in family history just clicked about 11 years ago. Almost overnight I was up until the early hours every day researching ancestors.

What areas in genealogy excite you the most?
Like many others, I enjoy the thrill of the chase, and that amazing feeling when all the evidence comes together to prove a theory.  I love to visit physical locations that related to my ancestors (not just graveyards!). On a personal level I’m excited about producing online tools that will help people in their research.

Do you have any ancestors that stand out as “special” to you?
I’m fond of the ancestors (and other relatives) who share my passion for genealogy. My father’s cousin is one of these, and he showed me some photos and papers collated by my great-aunt.

These included some hand-written documents from my Great-Great-Grandfather Charles Richard Jones (1828-1917) dating from the 1890s. Charles worked first for his father, a printer and publisher, and then as a bookseller. In these papers, he lists out birth, baptism and death information for many of his parents’ ancestors and their siblings. He wrote down absolutely everything he knew, even if it was uncertain or incomplete. This helped me knock down a brick wall that led back four more generations! What’s more, he and his wife had a charming and very helpful tendency to give their children middle names corresponding to an ancestor’s distinctive last name. Without all this I would have struggled with my research. I have a few photos of Charles and I bet I have a fair few of his genes too!

Who are your “brick walls?”
I’m half-Irish, so there are a few! I’m missing the names of three different great-great-great grandmothers on my maternal side: the wives of James McBride in county Monaghan, Joseph Marshall in county Tyrone, and Hugh Mathews in county Down. These are women who married around 1800-1830. In the absence of any paper records, I’m relying on DNA sleuthing.

In the U.S. there are loads of people who love finding connections with the Royal Family, is that popular in the U.K. too?
Well, we’re all descendants of Charlemagne! I’m sure royal connections are a driving force for some, yes (I don’t need any force to drive me!).

I do have a connection to the British Royal Family, but not an ancestral one: the brother of my 4th-Great Grandmother was a doctor called Sir Isaac Wilson who was in charge of the delivery at the birth of Queen Victoria!

The U.S. is keen on identifying Sons and Daughters of the American Revolution any thoughts on that?

In general, my interest in genealogy has improved my knowledge of US history.  I do have experience of DAR; I was able to trace the lifecycle family of Irish cousins, starting from a wedding not far from where I now live in London; the death of the father in 1837, the immigration of his family in 1845, and then the subsequent success of a descendant, Katie Putnam, who was a famous actress in the 1870s-90s, and who also identified as a DAR.

When did the idea come to you to develop the interactive cM Relationship Finder? Was it hard to write?
The idea came to me the day when Blaine Bettinger released the updated shared cM numbers in August 2017. The code isn’t complicated and I wrote it one afternoon shortly afterwards.  I then sat on it for a few weeks - I wasn’t really sure how useful it would be.  On a whim, I posted it to a Facebook group one day and it took off very quickly. Lots of people had some great suggestions that have helped make it better.

When did you decide to develop the Painter tool?
In March 2017, not long after I got my test results back, I realized that I was looking for something that didn’t exist – a simple web-based tool that I could use to store and visualize segment data, returning whenever I got a new match.

I created an early version very quickly, but it was just a static page.  It took me a few months to get my head around the task; together with the learning curve for DNA and genetic genealogy, the programming challenges were a lot to take on.  By July I’d got things working well enough to invite some beta testers. I still wasn’t quite sure when to put it out there. I ended up casually mentioning it in a Facebook comment, and everything grew from there.

What new projects are in the works?
I am currently hard at work on a new release for the main DNA Painter site. This will aim to streamline the flow of the application and will hopefully make it more enjoyable to use. I’ll also be rolling out several new features over the next few months, including the ability to bulk-import segments and matches into your profile.

I’m also working on a new project with Leah LaPerle Larkin (aka The DNA Geek) that uses multiple relationship probabilities.

Is there a way we can offer a thank-you contribution for providing the world such a fantastic tool?

I will be adding a paid tier to the site in the new release, so those who would like to support the site and its future development will be able to pay a small membership fee in exchange for access to some new tools.

What are some of the pastimes you enjoy when not focusing on code writing (is that what you call it?) and genealogy?

I spend a lot of time with my children! I also sing and play guitar regularly at an “open mic” night here in London, and occasionally DJ.

Tell us some of your favorite things. (Music, food, movies, TV shows)
I’m a big music fan and have quite eclectic taste with a heavy bias towards the 50s, 60s and 70s. I love spinach and I rarely get a chance to watch TV!

Thank you so much for this interview, Jonny.

So, if you haven't tried these wonderful tools yet, go for it!

I am still having a blast!

P.S. My new book has been released. It is available in both eBook and paperback. Amazon hasn't linked them together yet. The eBook is cheaper and it is the same book. You can download a free Kindle app to your computer, tablet or phone to read it. The paperback is 8.5 x 11 so it will lay flat next to your keyboard.